Welcome back to Tunesday! We’re back! Today’s edition is focused on an EP release show I went to last week, and I am so thrilled to share it with you. Yay for live music Tunesdays. On with the show!

The show was for Shoobies’ latest offering, Cherry. Shoobies, who’ve been around these parts before (see October monthly me) are a New Jersey four piece making the best kind of noise. Cherry is their secondary offering, putting out a completely different sound from their debut EP, Claude Monet. Cherry is heavy with soul influence and does the job of getting into your bones expertly. A more mature collection, the songs are called Love, Sex, and Drama. It’s a metaphor. But, if you take it literally and create your own, it’s just as good.

If there’s something that the guys from Shoobies know how to do, it’s put on one hell of a show. Complete with 70s esque mustaches being hastily shaved off before the show, an intro that did it right, roses, and an actual smashing of a guitar (which I never, ever thought I would live to see), Shoobies elevated The Saint in Asbury Park.

You can listen to Cherry here, and Claude Monet here. Find the band on Instagram, Twitter, and everything that matters at @shoobiesnj. 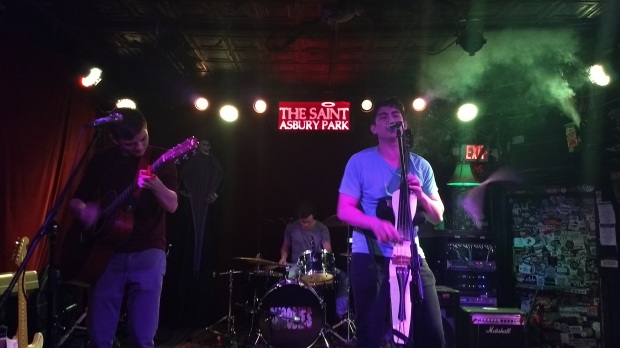 The Happy Fits are three boys who find themselves bathed in blue light more often than not. A rock band with a cello, they’re an eclectic mix of The Black Keys, Alt-J, and Vampire Weekend. They played songs off their EP, Awfully Apeelin’  and just so happened to treat all of us with some songs from their upcoming album. 2018 is going to be a big year for the band – which is saying something, considering the fact that they surpassed 1,000,000 plays on While You Fade Away and expanded their fan base by quite a bit. Keep an ear out for their debut album coming out in the first half of next year.

Hannah Riley performed her first ever show at The Saint, and I was blown away by how good she is. A mix of heavy Lana del Rey influence with touches of Lorde and Halsey, Hannah’s voice is power and is full of tremendous capability. Her debut EP, Recovery, has true bangers including IDWBY, but her cover of Lana’s In My Feelings absolutely blew me away. To say that she’s going places is to understate just how good she is, so listen for yourself. 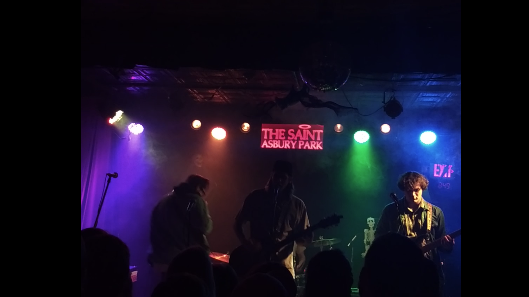 Trustfall is emo math rock that makes me think of 2009 and jumping. If this made sense to you, you’d adore them. Their set at The Saint was a joy – if you’ve ever wanted to yell lyrics with people who wanted to do the same, you can probably imagine the vibe to come from that. That’s exactly what the atmosphere was, and I am so grateful to have been there. Their latest release, Space Dawgz 2: Dogs in Space is full of the same; listen here.

and so concludes the live edition of tunesday! honsetly, this last weekend was incredible, and i’m thrilled to be able to tell you all about it. congratulations to shoobies for releasing one hell of an ep, and to all the other bands that performed – what a night. now, back to my regular programming of being a mess? i think yes.

I made my first mindmap in about a year yesterday. It was for a maths class I’m taking. If you’ve been reading here for a while, it should come as no surprise to you that I am very bad at maths. If you are a new reader, let me spell it out for you:

I am terrible at mathematics. I am so bad at maths that every time I finish a problem, there is a mini earthquake in the classroom I’m in and a voice from the depths of the earth that bellows, “HER ANSWER IS WRONG. AGAIN.” I do so dismally in maths that the one time I finished my homework for this class early and submitted it, I got such a low grade that my professor chose not to count it. I am horrific at crunching or crushing or chewing or chomping numbers. I cannot numbers. I can’t maths.

Right. Now that that’s been made clear that I am bad at maths, I’ve forgotten what else I wanted to say and why I’ve titled this post “mindmaps”. Do excuse my haphazard writing and website and self. I’m a mess, but you knew that. If you didn’t – don’t worry, I won’t give you a paragraph of imagery – I am a mess, and now you know.

If there was a mindmap of me, it’d probably look like this:

I like how mindmaps are really just a big mess that has a purpose, so it’s not so messy anymore. I like the idea of myself as a mindmap. Maybe there’s something to show for it; something more than a failed test or a mess of a girl in love with every bassist from any New Brunswick alt/punk/rock band. Maybe.

His name probably isn’t Michael, but I’m gonna go with it.

Outside one of the buildings where I go to school, there is a parking lot. Inside this parking lot, there is a motorcycle. Upon this motorcycle is Michael, and I want to knock him off of it.

Michael drives (rides?) a shockingly orange, very loud motorbike. When I say very loud, I mean startle you from sleep loud. I mean, get on the ground and duck for cover loud. I mean this boy spends 20 minutes revving his bike every time I have the misfortune of walking past the academic building loud. I have no intention of hurting him or his ego, but I swear to Jesus, Mary, Joseph and saint above that I want to destroy that bike. Good heavens.

The first time I walked past, I was with a friend who yelled, “We get it, your dick is MASSIVE” as we walked past. I laughed. The second time, he was just doing it. I didn’t want to yell but also, I just really hate how loud it is. So, I walked past muttering obscenities to myself. I most recently walked past last night at 7:50 pm while trying to get to my 7:40 French class, and that experience is why I’m writing this post. Y’all, I have never wanted to kick a bike so badly in my life.

I was already in a daze, having slept through my alarm, so the first kick of the exhaust was like a gunshot ricocheting through my entire body. Fine, it woke me all the way up. Not fine because it continued. The second kick made me mad because I jumped and bit my tongue. By the third, I was so close to just walking right up to him, but I didn’t want to be so close to the noise.

Essentially, what I’m trying to say is maybe you have the world’s biggest dick and you want everyone to know it via the ridiculous noise your vehicle can make – you can still just not. Consider just…not.

have you listened to parekh & singh’s album, ocean? friend, you should – i just finished my maths homework before class in a bit and i’m feeling tentatively okay. just the right side of tepid.

last week i was in the pit. i didn’t go to class for three days, and all of those classes had attendance policies. have i gone ahead and messed up my grades? maybe. could i have avoided it? unfortunately, no. it’s what the great sciencey people who put definitions to what happens in my life call a hypomanic hangover. baby, do i have an analogy for you.

imagine you’ve been feeling really good for a while. i’m talking two or three (two and a half) glasses of that really good merlot and then a shot of tequila because party time, type of good. lots of dancing – the kind of drunk where you’d dance to a siren – and lots of good feelings. you got things done, you’re allowed to relax, the people that love you really love you and things are good. you never stop drinking because you don’t have to. things are good.

After 7 drinks I’ll bop to a car alarm. This really isn’t proving anything. https://t.co/JIUSIKrsAo

then, after being drunk for three and a half weeks, you get hit with the mother of all hangovers. every single one you avoided manifests in one big boulder on your head and chest and legs, and suddenly you can’t get out of bed for a week.

the hangover is depression, my friends.

today has been remarkably better than last week monday, and while i’m still walking about in a bit of a hnagover haze, i’m hoping this doesn’t turn into a full fledged depressive episode. the whole world and jesus know that my gpa cannot handle that.

in case you were wondering about the title, it comes from the featured song. but, here’s a list anyway:

things that i’d never say or do*

have a good time of day, people.

* in some instances, this can be read as things that i’d never say or do again